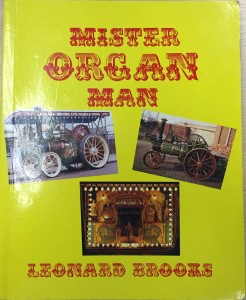 Leonard Brooks, who was a member of our Lodge, being born too late to be a full-time showman, he more than compensated by attending steam rallies, carnivals, street parades and major exhibitions for twenty years.

He had made an enviable reputation for himself with Firefly, the showman’s steam engine he owned in the seventies; Little Lady, the Foden steam lorry; but most of all with Prince, his scaled-down Burrell steam engine, and Ceõl, his fairground organ built by the Chiappa family.

Leonard And Ceõl toured from Aberdeen to Cornwall and in the process raised £120,000 for charity, appeared on BBC Television’s Playschool, and cut three records of organ music.

Mister Organ Man is the story of Leonard’s life from his childhood pranks with steam engines to his adult years as ambassador extraordinaire for steam and for fairground organs. It is a story that will appeal to the child in every one of us.